Ruy Anaya de la Rosa visited Peru in January 2018. The activities included various meetings in Lima with international cooperation agencies, FAO, film makers, coffee and cacao producers and exporters, academics and NGOs. The main purpose of these meetings was to raise awareness about the use of biochar for Sustainable Land Management and communicate the findings of the B4SS project in Peru. Furthermore, we were able to identify the actors that were most interested in learning more about the B4SS activities in Peru for us to invite them to our final country workshop in March 2018.

In addition, Ruy traveled to San Ramon, the central jungle, to see the progress of two of the four new biochar field trials on maize that Sebastian Dumler has established in the land of two beneficiaries: Gaida and Rogelio. This was the second experiment in Rogelio’s farm; the first experiment was established two years ago and it failed mostly because the maize plants were attacked by lorikeets. Besides looking at the second experiment, which is now being attacked by ants, Rogelio invited us to see the area of the first experiment where he later planted some banana trees. Interestingly, Rogelio informed us that the banana trees have been growing vigorously compared with other banana trees grown elsewhere in his farm. He said that this effect on increased plant growth was probably due to the biochar that had been previously incorporated into the soil during the first experiment. Rogelio is not waiting for us to tell him what to do or think, and he is experiencing the benefits of biochar by himself. 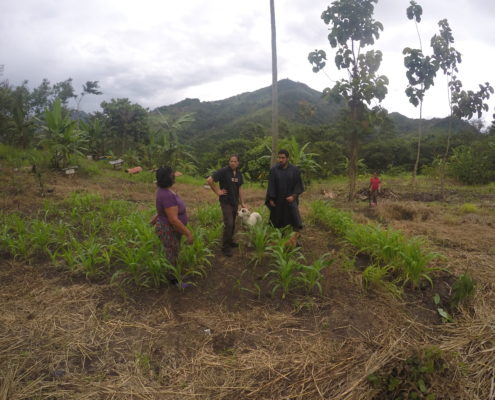 Looking at a biochar trial on maize. 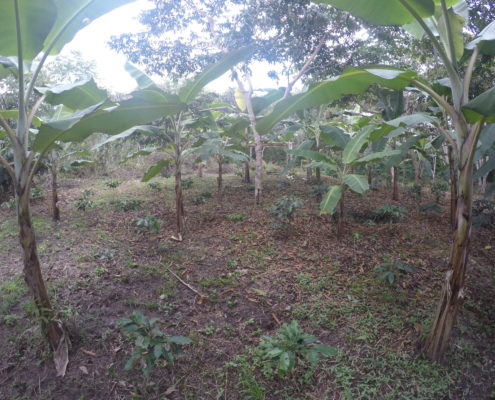 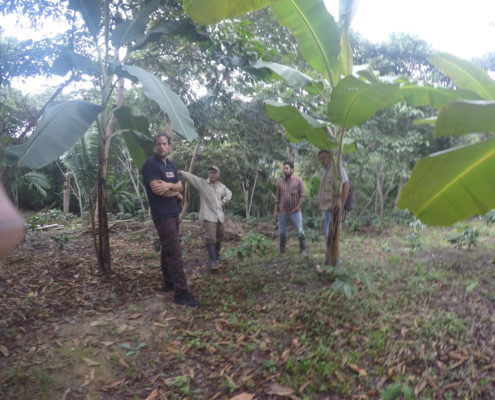 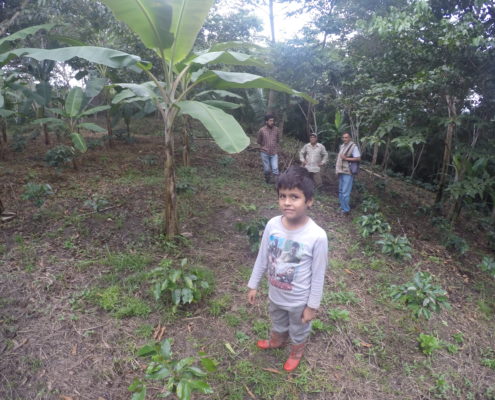 Still in San Ramon, APRODES organised a biochar training workshop with 70 farmers who are part of a parallel project on climate change that they have with the German cooperation agency, GIZ. The 21 beneficiaries of the B4SS project have been talking to their neighbours and friends about using biochar to improve their soils’ health, and therefore the other farmers asked APRODES to conduct the workshop. Renato Gambarina (APRODES) introduced Ruy and Sebastian to the new farmers who were attentive to the presentation. 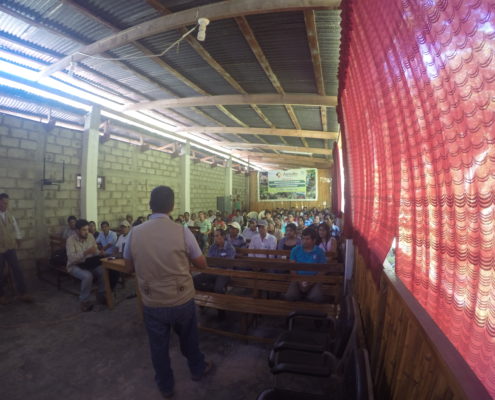 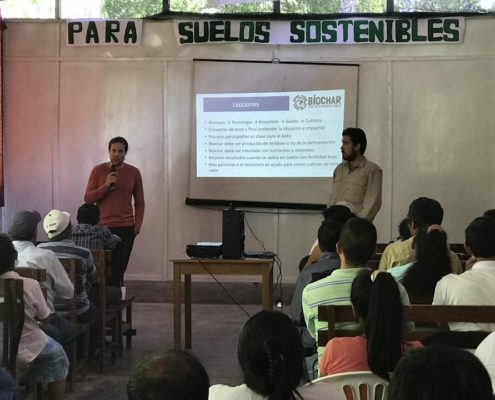 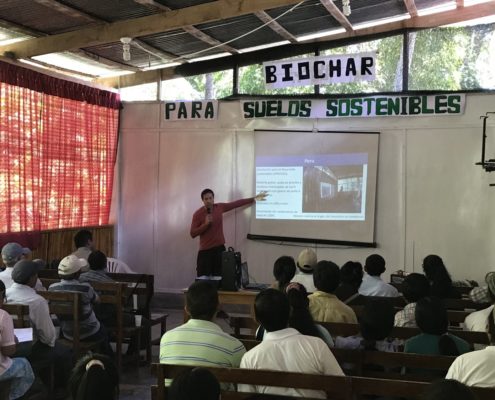 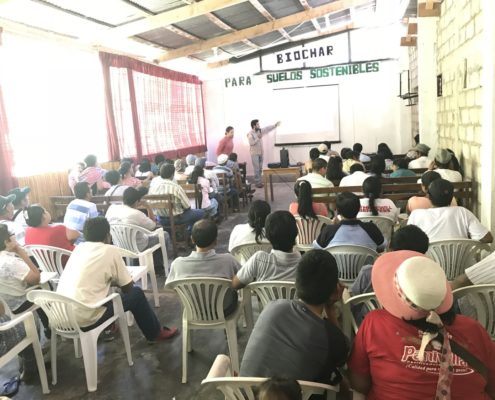 The highlight of the workshop was the demonstration of the operation of the soil pit Kon Tiki kiln. This workshop was particularly interactive since Ruy encouraged the farmers who have been trained before to show the new farmers how to produce biochar. There were some discussions and plenty of laughs about the enthusiasm of some farmers to share their knowledge with the rest of the group. Ruy strongly believes that this participatory process is more likely to increase the rate of adoption of biochar if it is conducted in a fun and respectful way. Finally, we ended the biochar training workshop with the traditional Pachamanca (food cooked in a whole in the ground), which has become an important component of our workshops in Peru. 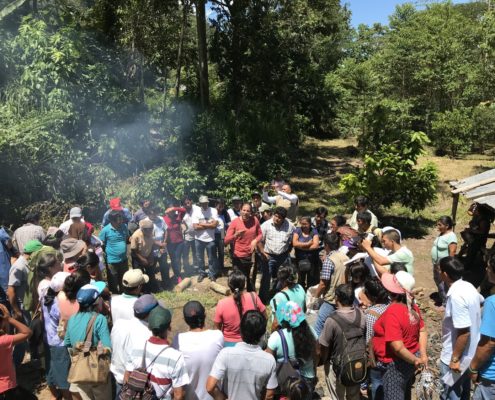 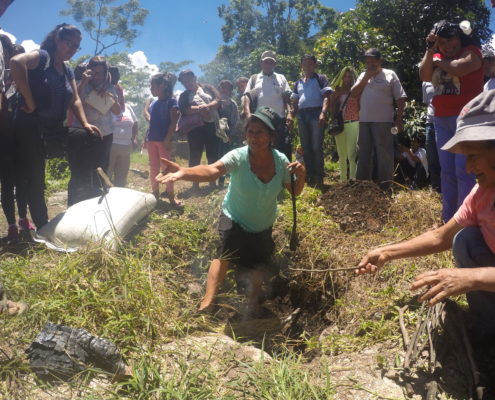 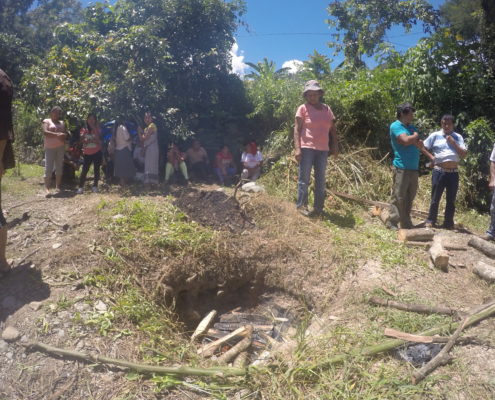 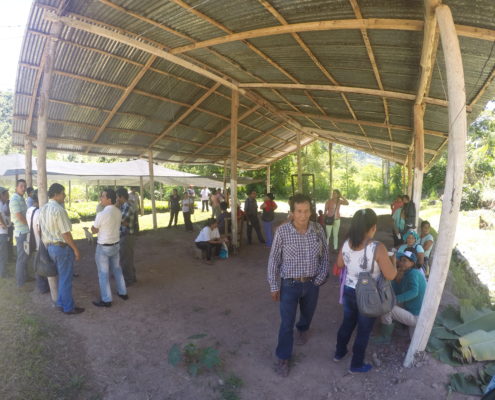 This time, the special thanks goes to Sebastian, Brenton, Estefany, APRODES staff, especially Ronald and Reyna, Rogelio and the new farmers that showed interest in learning and diffusing the knowledge of how to produce biochar to the remaining 470 farmers involved in APRODES’ projects in the region. There is still a lot of work to do.